Hello fellow Stillmaniacs,  Let's get ready and dive into some Stillhammer!
I don't know about you but I find myself constantly thumbing through my collection of White Dwarfs.  Issue 197 is one I come back to again and again.  It has actually vaulted it self into the nightstand bookshelf in a place of lauded glory.  Oh yes back on topic....Stillmania.

Here we are in June 1996 over a decade since the release of Warhammer 3E. and Realm of Chaos.  During the "GW Red Period" it has become a scene of tourney play and "Herohammer".  But do not despair fellow Oldhammerer's  there is a shining beacon of hope and his name is Nigel Stillman.  We all  know him as the man who authored Warhammer armies, and for a period would write an article here and there.  But it would seem for the most part that Nigel would stay in the shadows.  Then came Warhammer armies Empire, he would then continue on to write several more Warhammer army books: Wood Elves, Lizardmen, Bretonnia.

I still can't get enough of the Stillmania articles though.  They only spanned about 7-10 White Dwarf issues.  But these words of wisdom shine down from above on us mere mortals.  Harkening back to the days of Oldhammer and once again showing that it is okay to play the game in our childhood innocence and have fun! 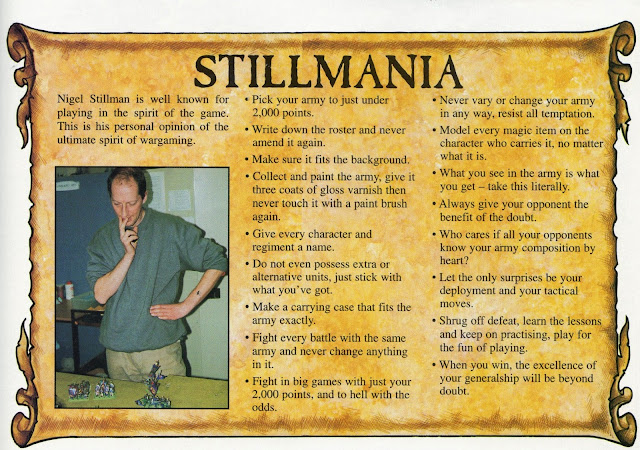 So journey with me back to the time of Stillhammer and become a Stillmaniac like me!


This first part reads a lot like many of our views on the current state of Warhammer/GW scene.  By the looks of this these views have been around since the 90's! 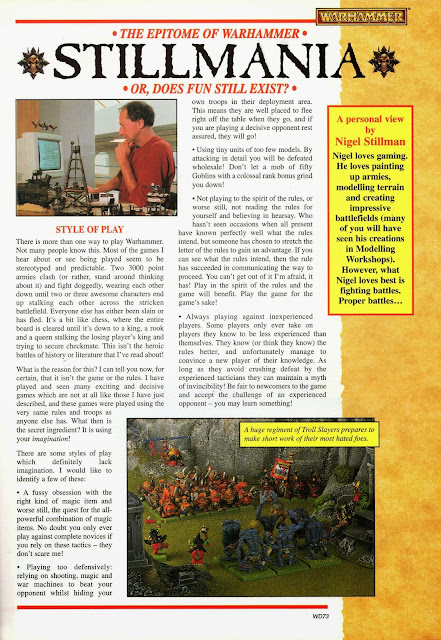 Now we are on to the interesting bits.

I think we need to pay special attention to the introduction blurb.  It reads, " Nigel loves gaming, painting, and modeling.  However what he loves most is fighting battles....Proper Battles."
You may need to read that again, gaming check, painting check, modeling check.  But battles you say?  Isn't gaming already covering battles.  Not necessarily not if we aren't using our imagination!

Anyone can push game pieces around a board.  But it takes imagination to have Vollrath the chaos dwarf get so angry for battle his head starts on fire, which he then uses to heat up his swords before he charges.  Or that when Black Vasken charges it is always at the head of Kellerman's Heartbreakers with lances held high and pennants fluttering.  Can you hear the thunder of their hooves yet or see the mud splattering up from the horses hooves?

Small armies now this is something I think we can all latch on to.  I read so often as Nigel states that we are all waiting to play with our army till it reaches 3000 points.......ugh!  It is so much fun looking at five finished figures on the shelf, and 70 primed on the painting desk waiting for that day when they are all complete before having a battle.  How about grabbing your champion and 2-3 figures and then a hand full of baddies and start battling tonight?

It may surprise you that generals weren't always generals, and statistically most awards for bravery are from lowly foot soldiers.  So with that in mind as you are painting your army, you could be battling your champions career.  Then if you have a blog and love to post battle reports think of the material you now have as you start your man/women off as a rags to riches story clawing and fighting their way across the Oldhammer world!  It could take some of us years to narrative our hero from a 250 point hero to a 3000 point general.

Then as Nigel states we are not gaming a sudden death pitched battle every time.  Things tend to become more objective or scenario based which is what we are probably all striving for in the first place. 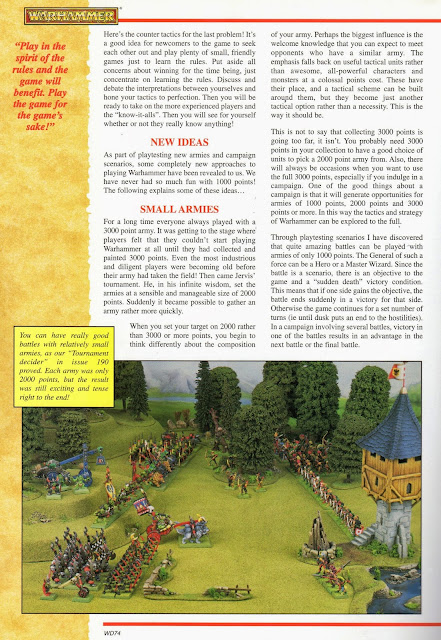 Don't be so Dramatic......wait actually drama makes for good battles!  Here we get into Nigels views on scenarios.  Where he advocates a number of different battle deployments.  Even going as far to say the armies might have to be unbalanced to make for a dramatic scene. 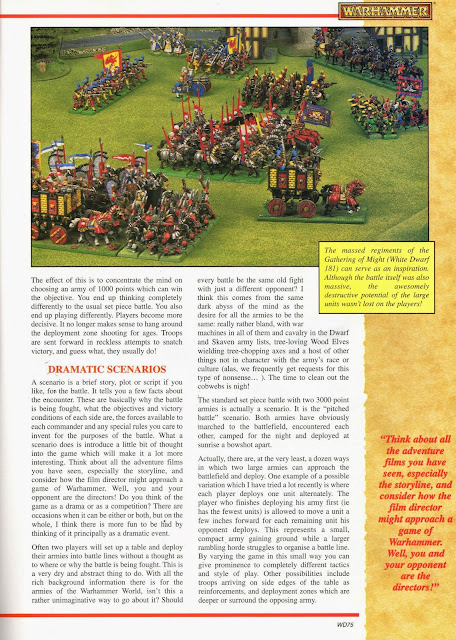 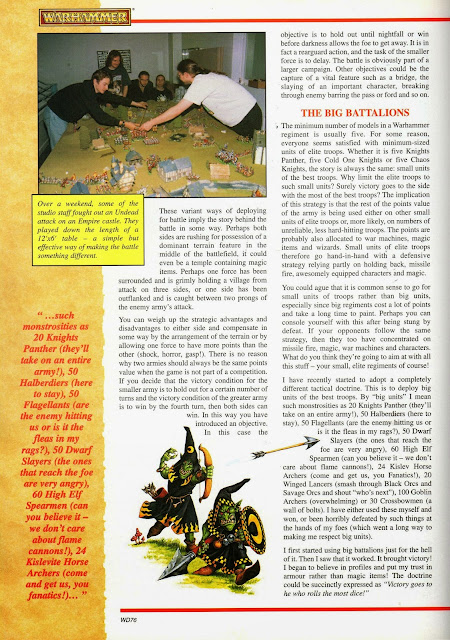 Now how to build a proper Stillhammer army.  Start off with 1 or 2 characters.  Several big units, yes don't take your units minimum, maximize those dead ard' boyz.  Then have 1 or 2 supporting units.  Then if your like me don't include and war machines or rotten wizards. 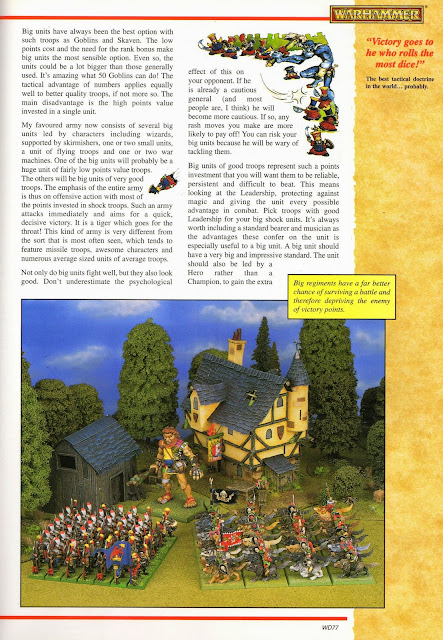 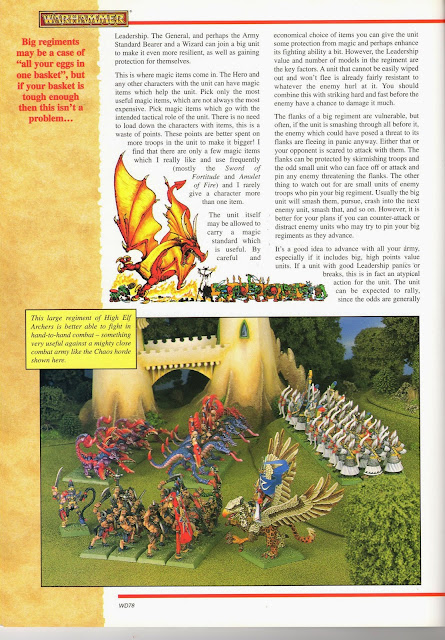 One other point made here is advancing your whole army from the table edge.  In case of disaster it behooves us to have space for our army to rally, instead of fleeing of the battlefield.  So always seize ground. 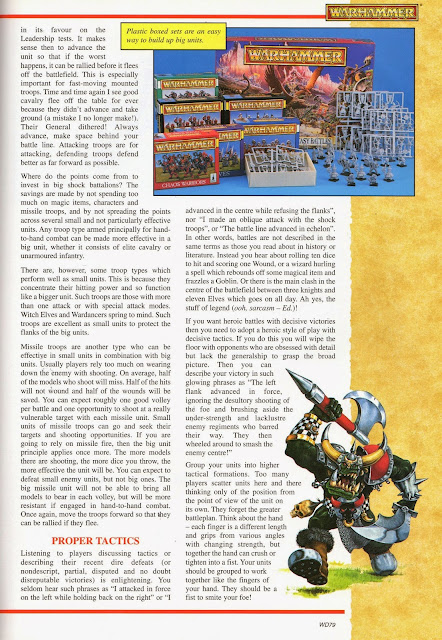 On a final note Nigel discusses proper tactics or developing a heroic style of play.  This aspect is something I struggle with and I'm sure I am not the only one.  I really do need to start developing my heroic play and using decisive tactics.  It is something I will continue to work on in the future.  Hopefully for the benefit of you my esteemed visitors. I hope to regale you with tales of victory or the terrible feeling of defeat With many more battle reports to come.