Enrich your Blades with Deeds of Violence

So  with a busy schedule up to Oldhammer USA I thought I might get a quick jump on everything so I am not rushed days before.  The only thing that is missing from my army is 2 chaos dwarfs.  I'm not holding my breath on getting these before the Oldhammer Day though.  However I have finally Stillmania'ed my list and am posting it for viewing.  Let me know what you think. 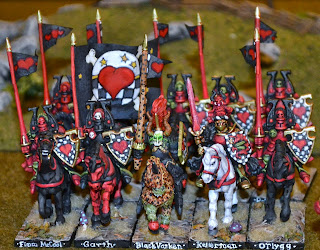 Black Vasken was once an average knight, but then he died.  So one day he awoke in his tomb, having been brought back from the dead by some truly nasty chaos cultists.

Unfortunately they were not that bright as they brought back the wrong knight!  While attempting to raise Vasken's uncle a great champion and bastion of carnage, they miscast their spell and raised the average Vasken instead.  Well long story short Vasken and the cultists did not get along, and soon the cultist were dead.

Vasken is not one of the greatest chaos warlord's but what he lacks in brute force and carnage, he makes up for in tactics and a very charismatic recruiting pitch.

So with the thunder of hooves, and the ripple of banners here is what Vasken brings to the table:
All points and stats are from RoC: Slave to Darkness or made up by me or someone smarter from the internet. 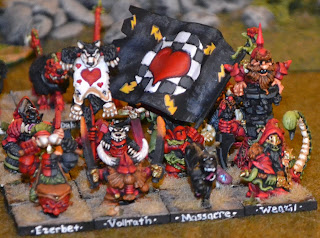 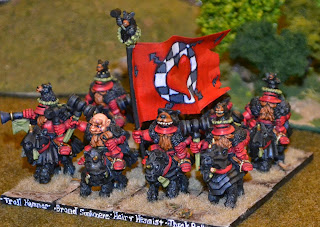 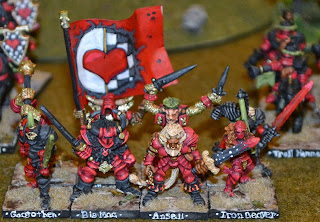 Sunkeneye's Sackers- 8 Chaos Dwarf Cavalry w/ Heavy Armor, Mounted on Pony's, Standard , Base Chaos Dwarf stats except for movement 6", and +1 Save for being mounted
+4 Save