A Quest for Stillmania: Raise the Levy

Nigel takes us through the steps of creating an army the Stillhammer way.

We start of with a quick overview, where he states that raising an army is a methodical thing that we should really take some deep thought in before we start to recruit our soldiers.

So what army should you start with.  Well this quote says it all, "If I were suddenly transported into the warhammer world by a wizard whose army would I rather end up in?"

Once you have decided on the army you are going to start, do not veer from your initial path.  Our better half's might like this as once we have budgeted our army points we shouldn't change them.  So I guess that means no more sweet deals of Ebay.....ya right lol. 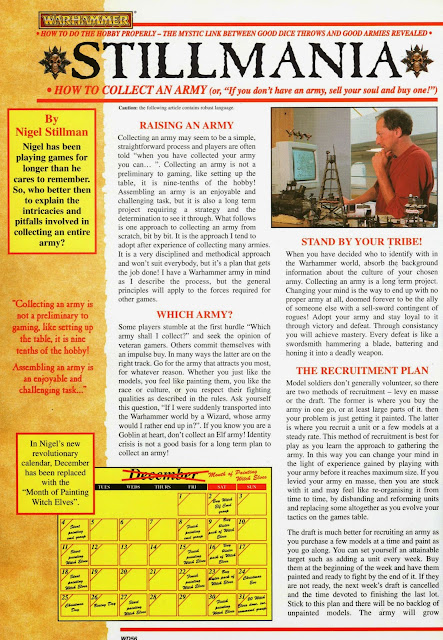 The recruitment.  Now I will say I'm very much an individual who will recruit enmasse, however I see the wisdom in drafting one or two blisters at a time.  Either way you go though I think both methods are relevant currently in the Oldhammer scene.  Especially you collectors who will scour and scour for that OOP treasure for low price.  This could make your draft last quite awhile but I think that hunt excites some of you.

However I think we can tweak this methodology to our painting queue.  So instead of priming up all 100 figures we can prime up 3-5 and hide the rest out of sight.  Knocking out 3-5 figures a week should be easy enough....."Oh what's that honey?  Be right there!" 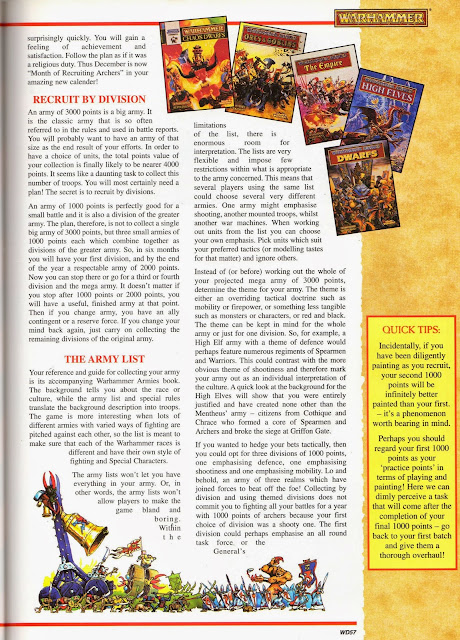 This next part goes along with your recruiting plan where it is advocated to recruit by division.  Here Nigel explain recruiting in 1000 point divisions.  But this could be further broken down in to brigades of 500 points, or even battalions of 250 points.  Start with whichever points value doesn't make you cringe at the thought of painting. 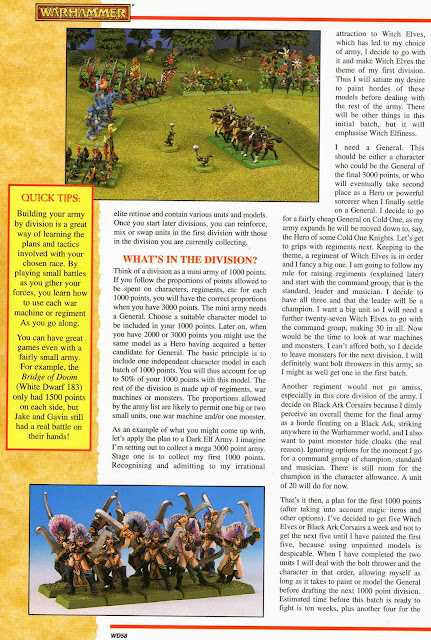 Next pour over your army book or whatever background fluff you have decided to use and pick a theme.  No matter how miniscule or monstrous pick a theme something that will make your army unique from everyone else.  However if nothing is coming to mind Nigel states that three divisions of your army could be emphasized each at: defense, shootiness, and mobility.  This will give you a well rounded army that should be able to handle all comers.

Regiments!  Nigel goes into detail his thoughts on starting with a standard bearer, then then the rest of the command group.  After that it is cake to fill in with the right allotment of troops. 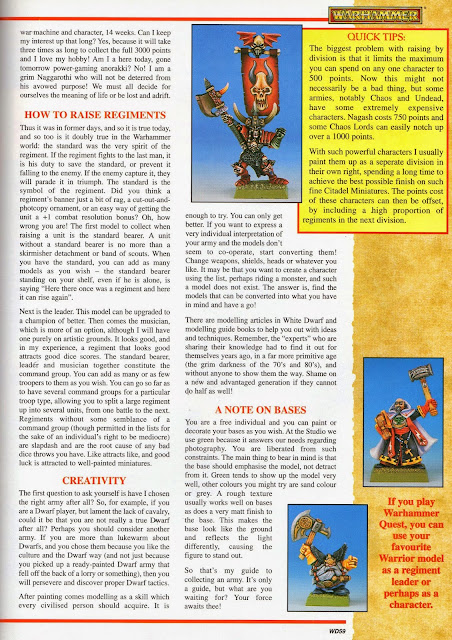 Also here is a bit of a side note on the Stillmanic view of Allies in armies.

So there you have it.  For most of us this is probably just a nice refresher.  However if you are new to the hobby and have just stumbled here by chance this would be an excellent way to start and army.  Now raise your standards on high lads, keep those jaws firm, forward march!