I really enjoyed Arthur Rawdon's force from the last game.  I decided I would stick with the Cock of the North.  In reality Arthur's military career didn't last long. But pulling from Clarence's and Barry's alternate history I'm going to soldier on with him and rewrite his exploits.  Well he isn't the best commander so maybe exploits is the wrong term. 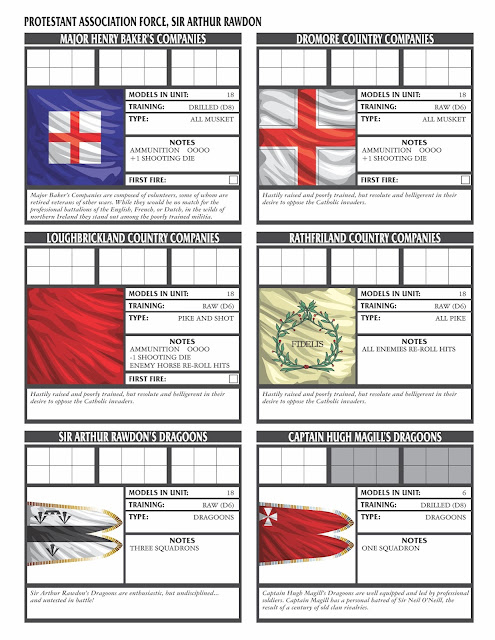 As you can see my army will consist of 4 units of foot and 4 squadrons of horse. Though these are mostly poor (Raw) militia units.  I have purposefully picked this army for the challenge of trying to get them to survive and hopefully do what I ask them to do once in awhile.

My army will be made up mostly of Warfare Miniatures.  However there are some Perry, Foundry, and Copplestone miniatures mixed in for variety.
Rawdon will be the army commander, with Magill and Baker as personalities commanding their own units.  That should take a little pressure off Rawdon as undoubtedly he will want to be at the head of his huge dragoon regiment.
Ah the poor foot taking casualties even in bare metal.  ;)
Where have our pikes gotten to?  I'm going to wring that supply clerks neck!
Forward boys we must take that causey!
Magill's squadron looking nice and professional.
Oh the poor rural companies of Loughbrickland and Dromore.  Can they stand to face the enemy?
Rawdon's shiny new regiment, 3 whole squadrons.

You might notice a few bonnet's mixed in for variety.  I got the idea from this post. 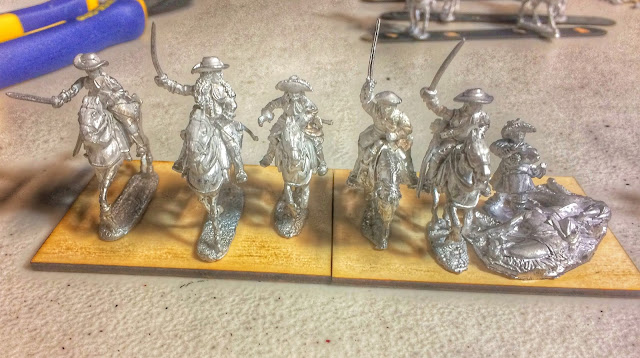 Will we be in reserve all day?

As you are reading this the whole army is primed, and I have started on painting all the horses.  So updates will hopefully follow very soon.
Posted by airbornegrove26 at 11:10 AM