The campaign has begun!  The first game is played and ready for you in a wonderful comic report.  If you are not sure what I'm blabbering on about do have a look here and here.

I rolled up a raid and capture for my first scenario.  An unusual character has appeared in the wastes.  A small girl who claims to be from another place.  she meets Vollrath and his band of chaos dwarfs along with Nigel deep in the jungle.  Vollrath is quite taken with this little time traveler and ask her to join his band.

Meanwhile Slaggo Mad Mort's wizard has senses the disturbance, and tells Mad Mort he should go and capture her.  He sets out with a large contingent and tracks Vollrath and Scarlet to a camp in some ancient ruins.  With no where to go Vollrath forms a defense but knows their chances are slim.

Scarlet pulls out a small device and says she will handle it with a wink.  Dreads eyes slam open, where did that voice come from?  "Yo We'n Trble Come Qk!  All she knew was Vollrath and Nigel were connected to this message.  She alerts Vasken to send a releif column into the jungle in search of the dwarf band. 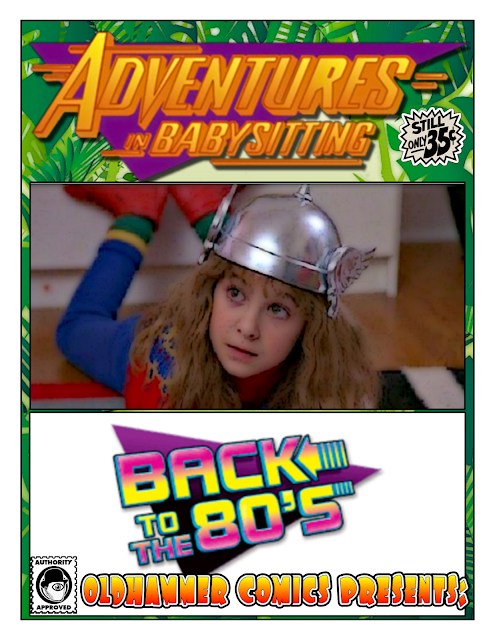 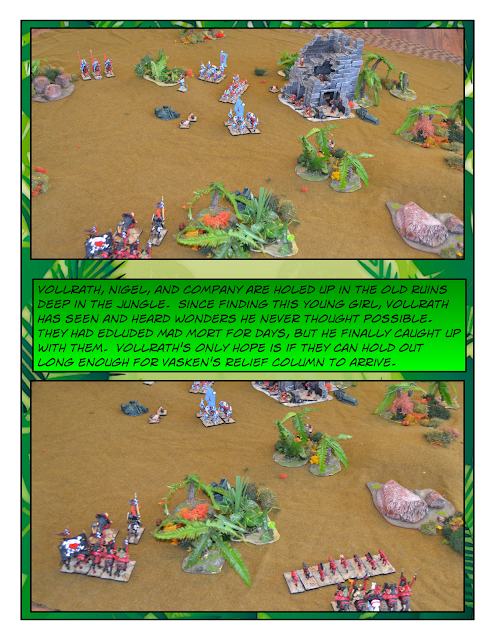 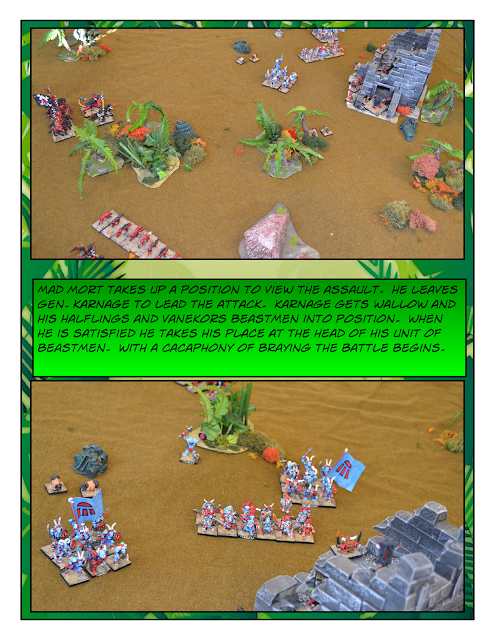 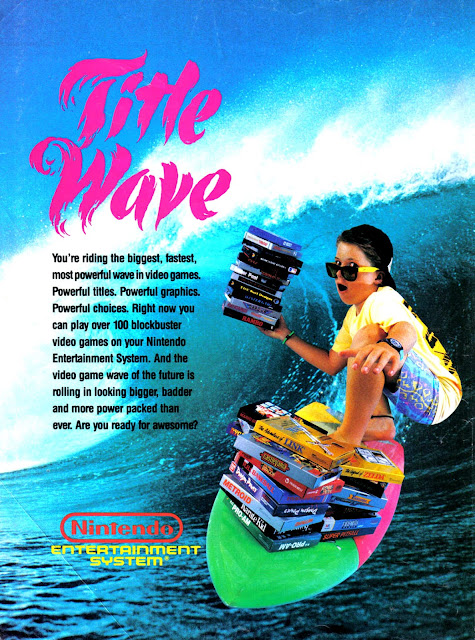 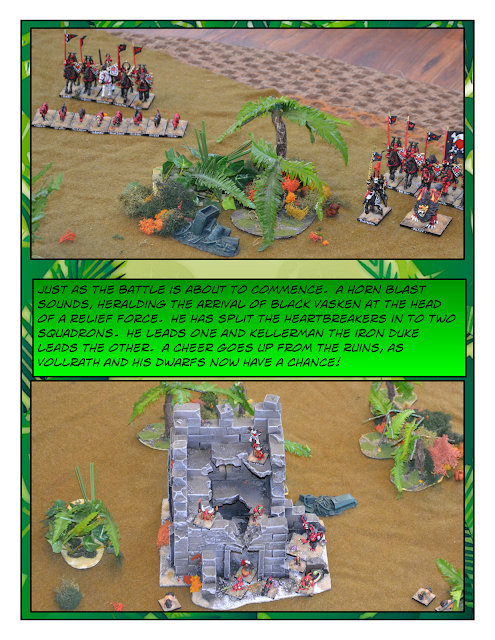 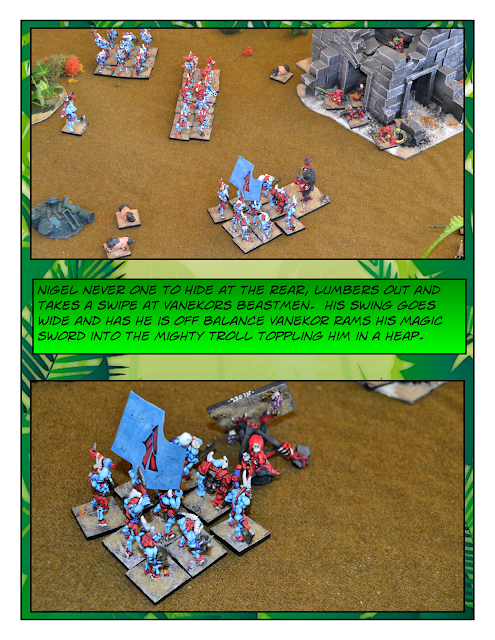 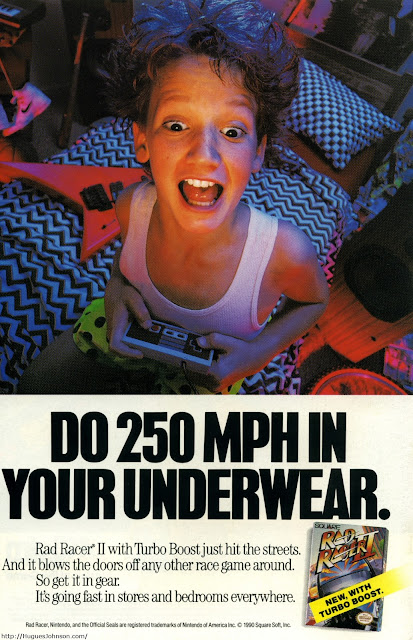 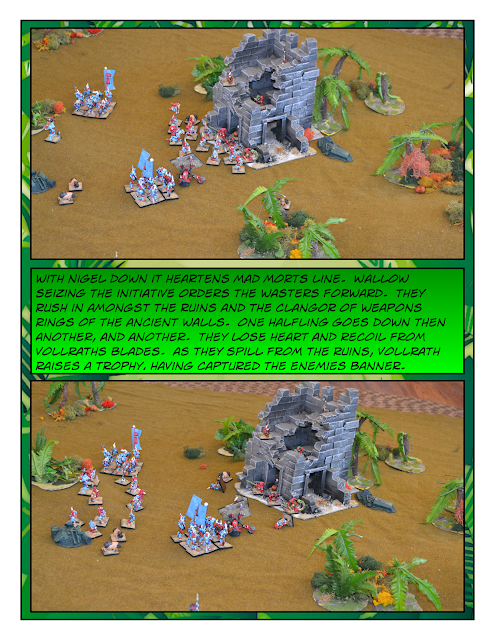 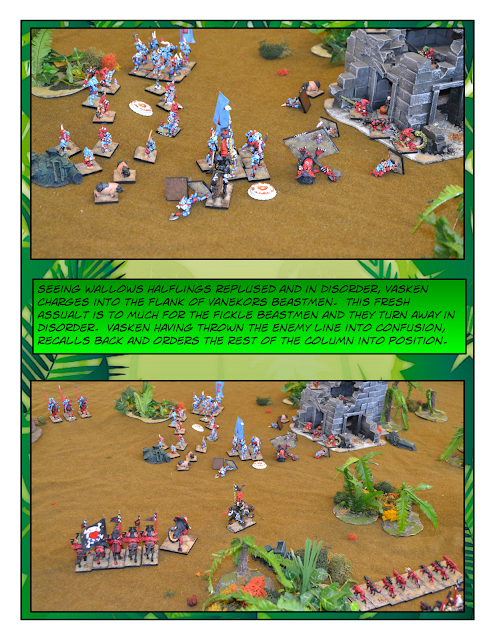 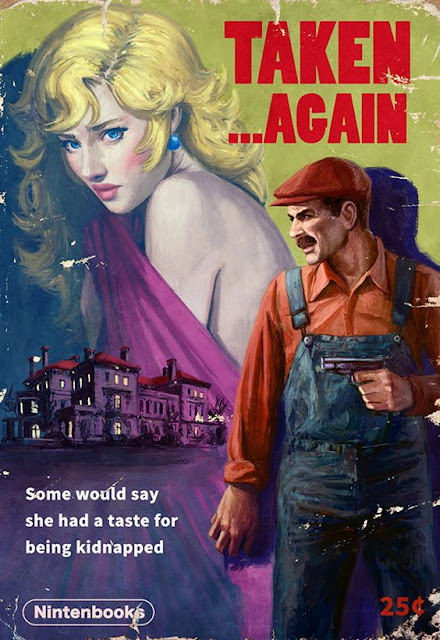 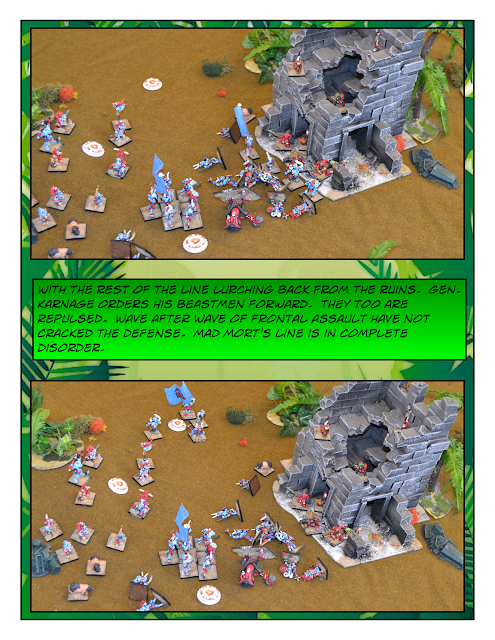 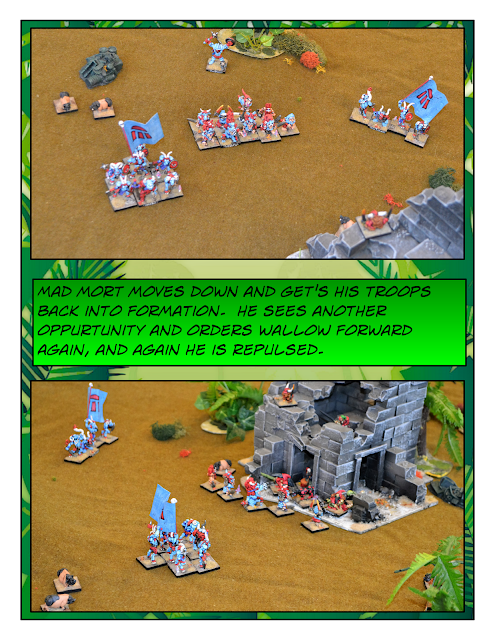 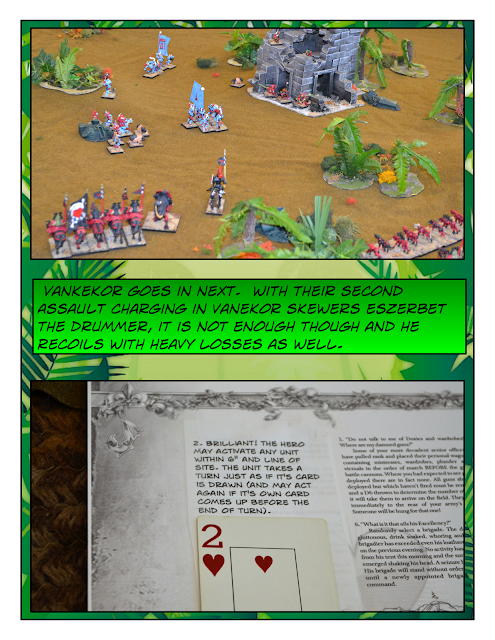 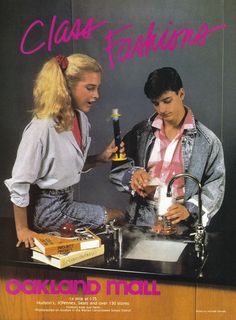 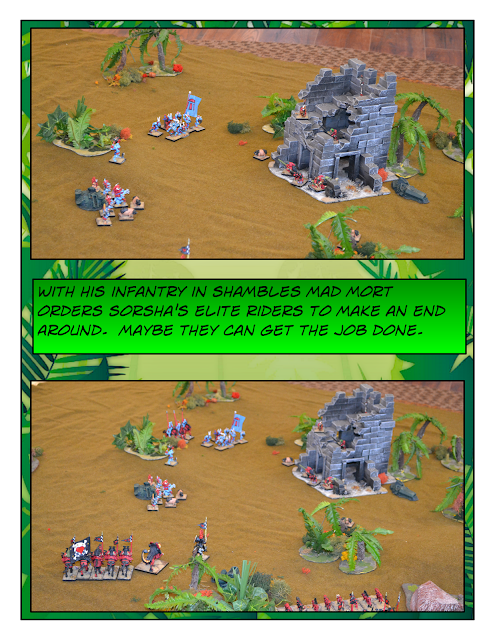 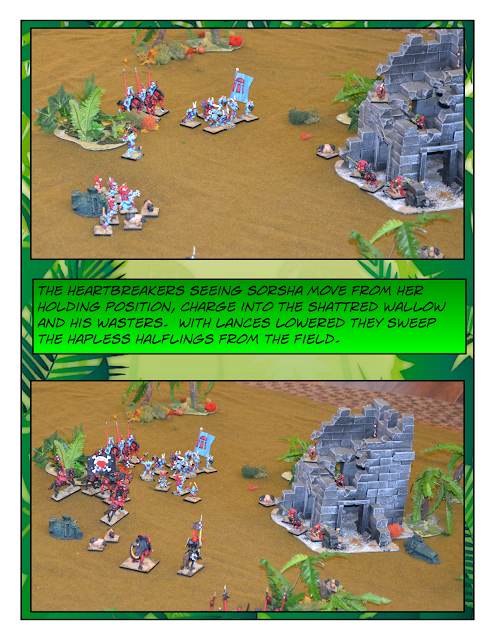 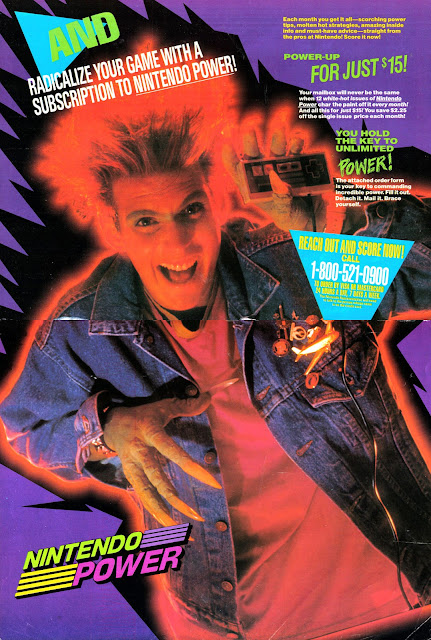 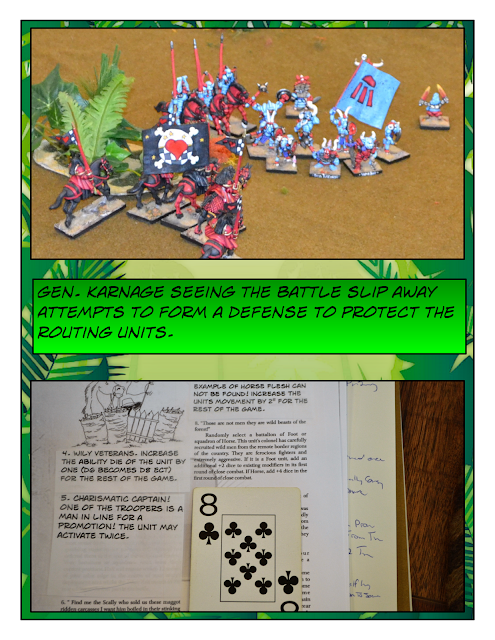 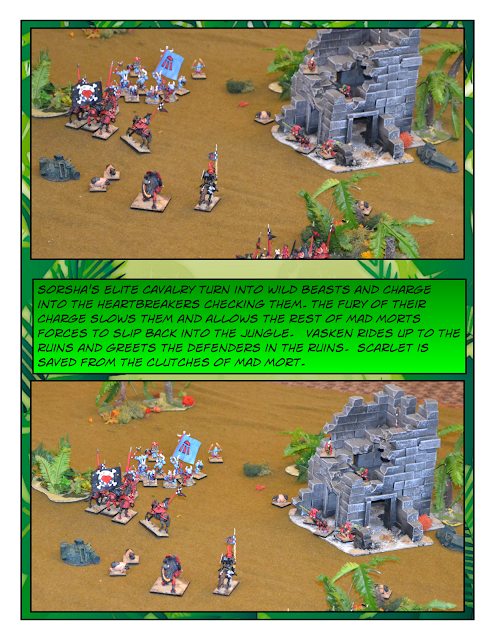 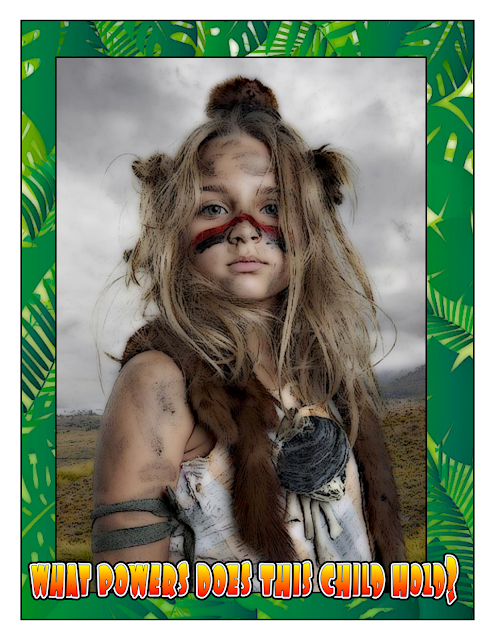 Yes indeed what powers does Scarlet hold?  We will find out has the saga continues.

This game was played using Donnybrook rules with a couple small tweaks.  I think I am going to have to make a couple more after talking with Quindia, but they will only make the game feel more Warhammery.

This is the first time I have used the rules to their full extent and let me say they hold up even with a bit of hacking.  I am really impressed with these rules.  And with a few reviews already for Rogue Stars coming in as poor, I can say this is a great alternative with a little imagination. ;)

Vollrath's unit having captured a banner get's a units bonus.  I rolled it up and they gained foremost getting a +2 to their maneuver roll.  Vasken was also entitled to a new territory and rolled a river crossing.  Which will allow him to field Three Names Thunderers my chaos dwarf cavalry.

And there you have it my first campaign with using Donnybrook.  If you have any questions about the campaign feel free to ask.  ;)