As a devoted disciple of the Dark Gawds you all know how I love Eternal Champions.  Also you may remember all the way back here I painted some Chaos Warriors for Zhu and he came up with these amazing rules and campaign hooks.
Then JB and Cheetor's Quickening game latched on to my mind and never let go.  The ideas twisting and flowing thru my brain as a warp storm.  I started consolidating my ideas and the works of others till this began to form into a more solid campaign plan.  Which you will see below because in the end... 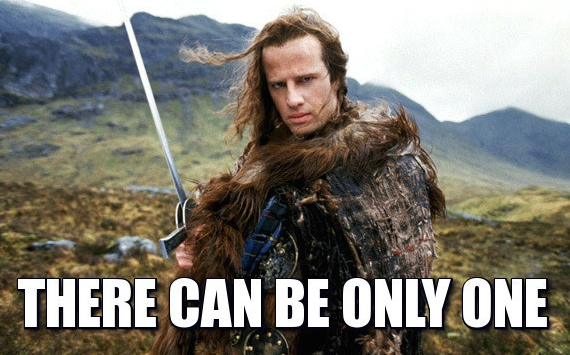 Heeeeeeere we are! BORN to be kings, we're the Masters of the Univeeeeeeerse! 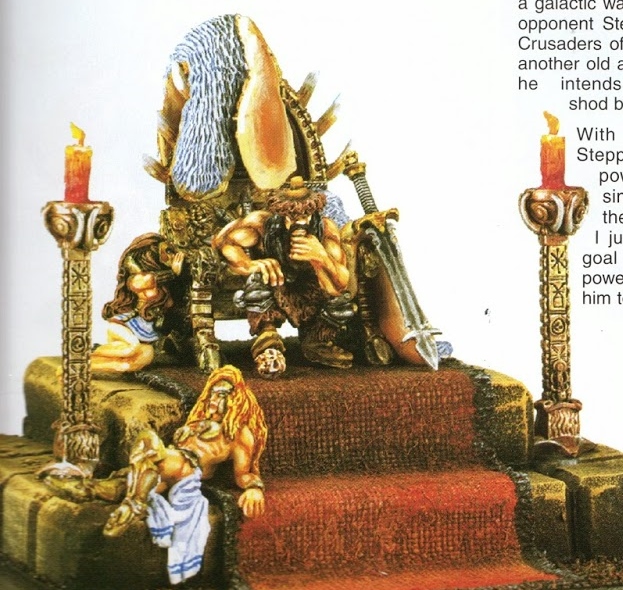 The Ironsand Desert will be the gathering of Eternal Champions...till there is only one!

The rough idea is your general can be an Eternal Champion. The Eternal Champion's are trying to channel the warp, summon demons, possess people, desecrate other powers holy sites, forge warp weapons, or do other foul rituals to gain power.
Inspirations: sensei/starchild from RoC books, Highlander, Jedi's and the Force, Masters of the Universe and I have the Power...This will all be loose, and matters most in the narrative blogpost you as the player come up with.
The warp is strong in this one! 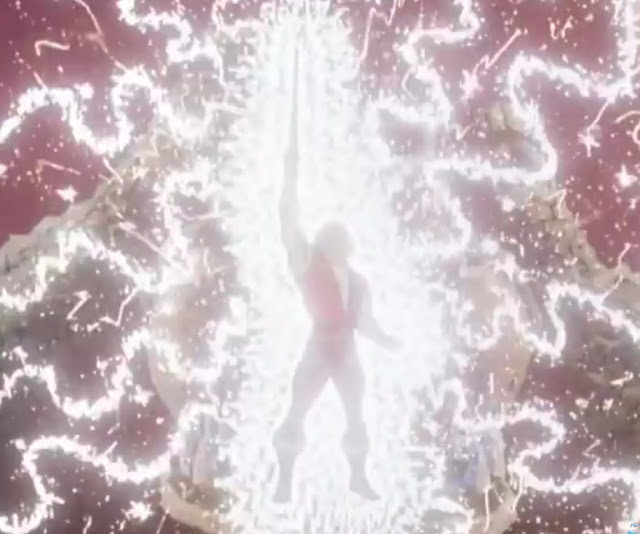 Here are the parts from Cheetor and JB that really took hold for me.
- Quickenings or I HAVE THE POWER- Eternal Champions who defeat another Eternal Champion rise off the ground with with the power of the warp with iceblue electricity coming out from every part of them. 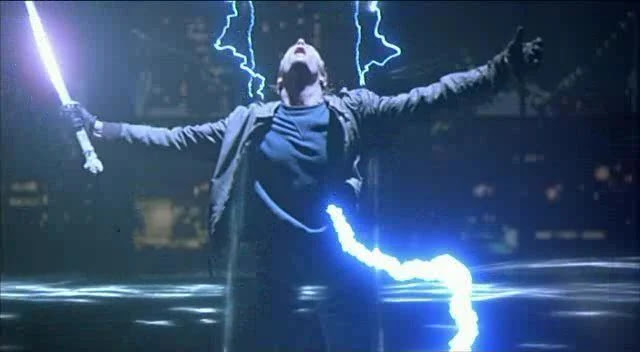 The guys had used a plastic cup with some printed explosions which was perfectly campy and hilarious.  I'm always out for LOLs but for my terrain setting I thought the idea of something more MOTU was needed. 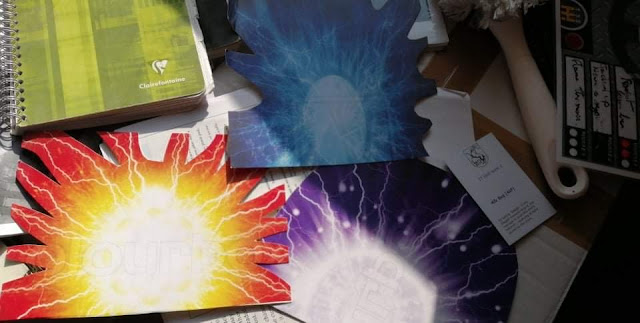 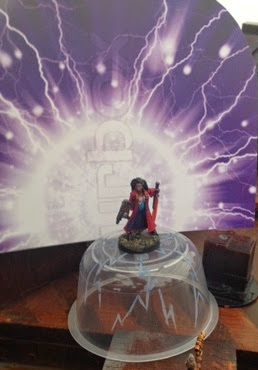 I settled on a Balewind Vortex for my Quickening.  Especially after reading Cheetors description. 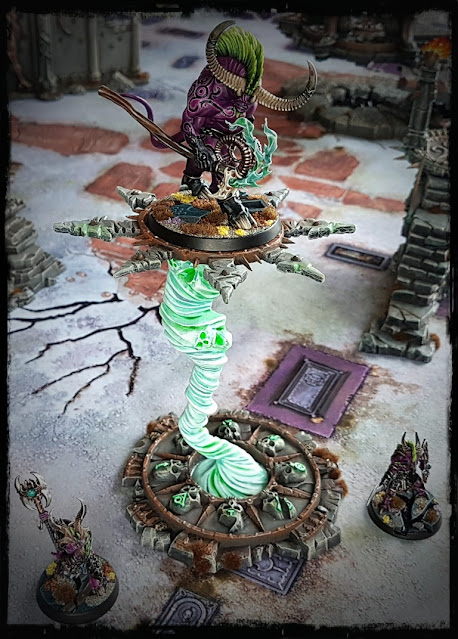 Of all the summoned-into-existence Arcane Fulcrums in the Storm of Magic range, the Balewind Vortex is the one that feels to me most like a video game power up.  That is one of the reasons why I like it.

I can also see it as being a spell effect that keeps an item out of reach in a video game until certain criteria are fulfilled, the vortex suspending a key or chest or other maguffin.

-  I thought that it would be fun to have some Holy Ground in the games featuring Ramirez and co. The Highlander concept of neutral holy ground actually makes marginally more sense in the context of WFB/40k “Sensei” than it does for Christopher Lambert and the rest I think. The Sensei are unknowing descendants of the Emperor and therefore could have some sort of religious/spiritual connection with areas of Emperor worship. Im probably overthinking it. Im pretty sure that the writers of Highlander didnt give it much thought…

Arcane Ruins can be used to represent an area of holy/unholy ground.  They could also double as warp gates to a terrain setup on another table. This would be perfect for a cosmic duel or other eye of the gods tests, they cold even lead to a final boss fight. The ideas are endless as the warp ebbs and flows thru the Realms of Chaos. 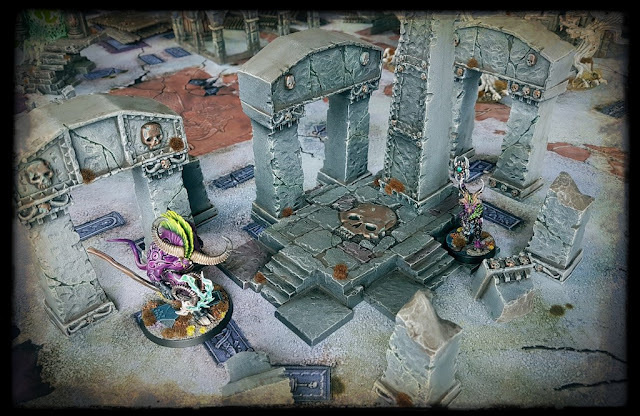 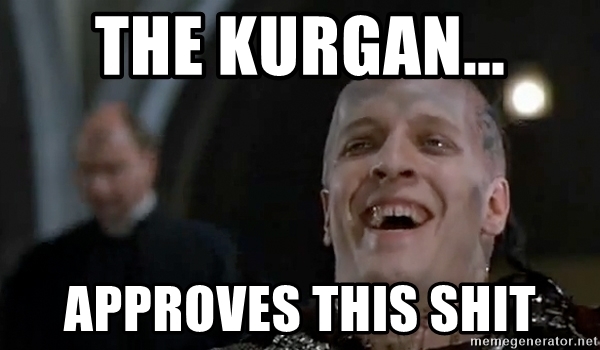 Path to Glory: Campaign Ideas
All you need to take part is:

- A title: The Tattered Prince

Jedi/Star Wars: Sensei type but more using the Force as the Warp...I sense a disturbance in the warp

HeMan- He has the Power, Graveskul, Mighty Strike

Mission Goal:  Each general I fight is another Eternal Champion that leads one step closer to unlocking the secrets of Graveskul.

The more Vasken uses the warp/force the eye of the gods test becomes risky and the chance to go Spawn is perfect for a Slaine warpspasm...which should be what I call it since I'm using the warp.  Maybe that's when I can use Kissy Snake as I take on his form when he has a warpspasm. 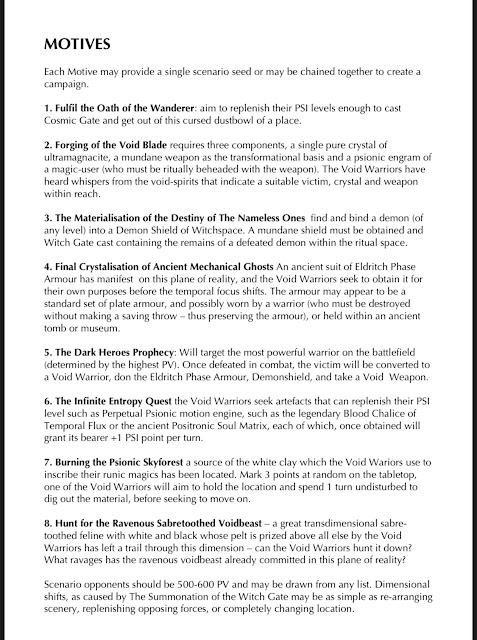 Warcry mission generator- it's a quick easy use 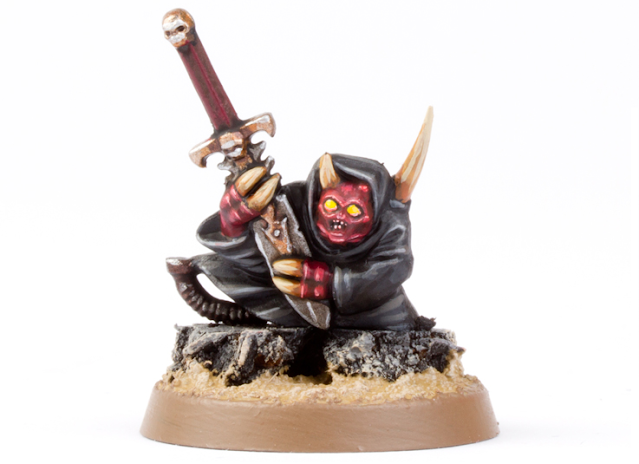 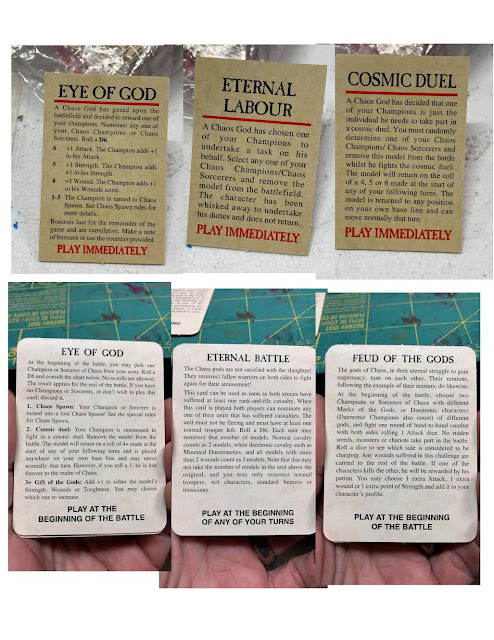 Stormcast Warcry Campaigns are most fun for me as narratives: Hidden Treasures, Lost Souls 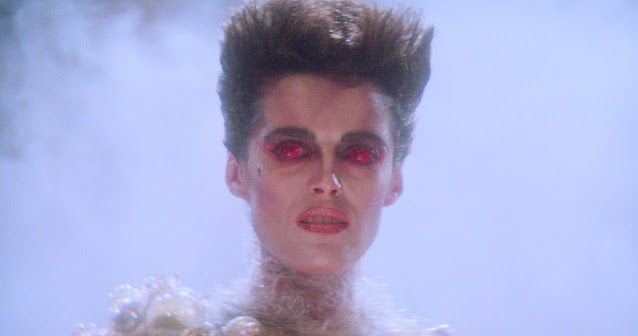 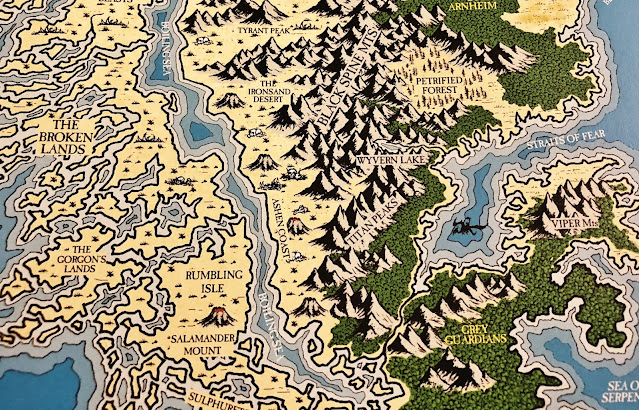 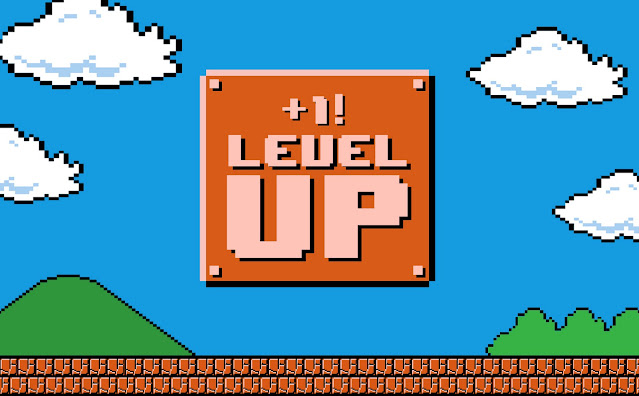 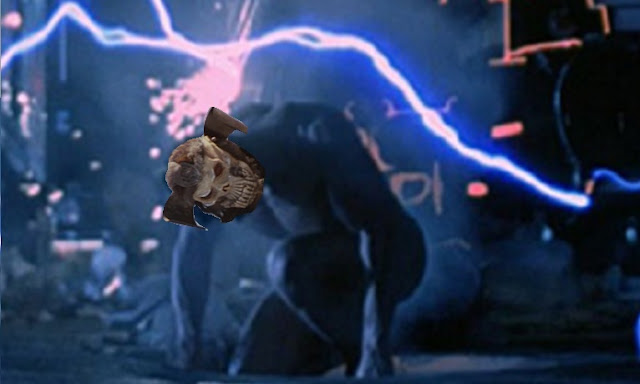 5. Warrior Familiar/Droid Sidekick- Make mini and he gets one S5 Attack before a combat starts per Path to Glory rules

6. Eternal Glory Lesser- Brazen Will: Ignore or dispel one spell against the champion per game

7. Eternal Glory Greater- Murderous Charge: Each roll to hit of 6 allows another attack by your champion

8. Eternal Glory Exalted- Champions Challenge: Once Per Game roll a D6 and add that value to the number of attacks for that combat (used only on multi wound targets)

10. Warp Weapon- Damage rolls of 6 ignore armor saves, however the warp is fickle and rolls of 1 wound the champion instead,  if rolled a second time can combine to form a Ultimate Warp Sword to unlock the secrets of Graveskul

11. Warp Crystal Amulet- Any unsaved wound roll a D6 and a roll of 6 the wound is ignored but a 1 Vasken takes another wound. 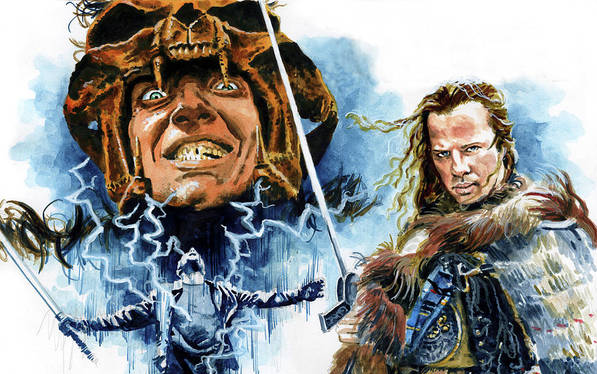 Path to Glory: THE QUICKENING (from Cheetor and JB with setting edits by me)

In the Grim Wastes of the Ironsand Desert...A kind of magic known to only a select few, the Eternal Champions, are compelled to assemble for the Gathering. Many defeated Eternal Champion souls want to break free and merge with the Master's of the Universe. They wont be able to till...There is only one!

“The Quickening” is a multi-player participation game based on an obscure piece of ancient 40K nonsense known as Sensei which I have switched to "The Eternal Champion", with a large dollop of dodgy 1980s cult movie "Highlander" added. Space Clancy Brown, Space Sean Connery and Space Christopher Lambert will be provided. Queen soundtrack and indecipherable accents to be provided by participants.

Each player commands his normal army and the opponent need not even know they are taking part if they so choose. See Scenario Special Rules below for details

After models have been set up each player is dealt two “Quickening” (realm of Chaos) cards. The player chooses one card to hold onto and discards the other.

To be the player with the last standing Eternal Champion at the end of the game. There can be only one.

The game lasts until there is only a single Eternal Champion left on the table or an O’Hammerer official decides that its over.

Each round players take turns in an order determined randomly from the Turn Deck with one event card as well which a triggered event is determined by a D6 roll of 6. At the end of each round the turn deck will be exhausted. Shuffle it and redraw at the beginning of the next round.

This mechanism will occasionally result in a Eternal Champion getting an opportunity to act more than once before another can retaliate. The Gathering is a strange time and the Master's of the Universe work in mysterious ways.

Warcry scenario generator is fine to use as well

Forging a Warp Sword/ Weapon: same as forging a void blade; Gain 1D6 Warp Points (warp banner chaos codex 2nd ed.)  at start of game...Subsequently for each wound caused by an EternalChampion  you are awarded 1 warp point to replenish the blade past what it started with...warp points can be used to increase the strength of an attack and also subtract at -1 to saving throws per point used

Forging or gaining another half to a Warp Sword gets the champion one step closer to becoming the master of the universe and ability to open the jaw bridge to  learn the secrets of Graveskul.

When wounded by a ranged attack, a Eternal Champion may choose to remove a friendly Extra within 2” instead of suffering the wound: the loyal companion has thrown him or herself into the path of the attack.

When another Eternal Champion bites the dust:

All miniatures adjacent to the victor are moved 3” directly away from the victor and Pinned.

The victor is placed on an upturned clear plastic cup above its current location. The victor remains elevated upon this cup until the next time that Eternal Champion Turn Card is drawn. While elevated, the Eternal Champion is immune to everything and cannot be engaged.

The victor is healed back to his or her full wound quota.

“You are shafe only on Holy Ground. None of ush will violate that rule. it’sh tradition.”

The chaotic gods have particular effects on Eternal Champion, due to their direct connection. On Holy Ground a shaky truce exists between the Eternal Champion: few will violate that law.

There are two pieces of Holy Ground on the battlefield: the ruined Aquila and the Space Marine monument. When a Eternal Champion comes into contact with either of these, two things happen:

Brother will kill brother but the holy ground will remain a sacred haven ...

Due to the magnitude of the events unfolding and the hand picked nature of the elite companions of the Eternal Champion, the rules for morale and Leadership are not used in this scenario. Eternal Champion and their Extras are immune to Morale and Psychology. 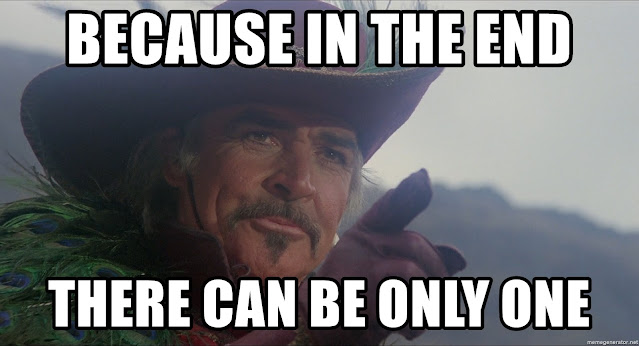