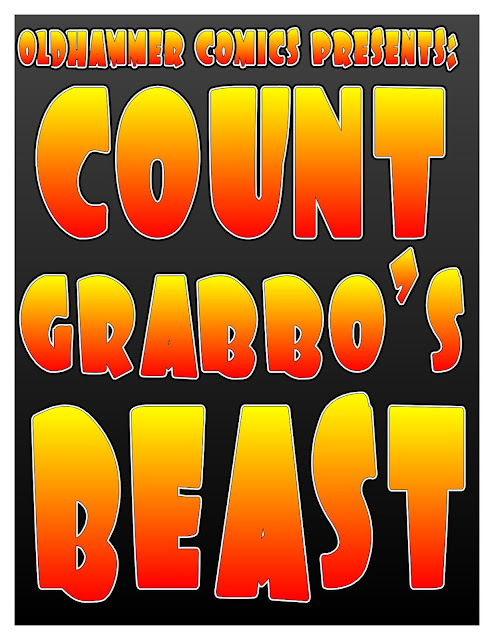 The first game at Oldhammer Day 2015 saw me and DeathJester gleefully descend into a nefarious dungeon of AirborneGrove’s design using his custom Heroquest board and some very excellent house rules, custom spells, and treasures. As if you needed more proof that heroquest is still one of the greatest games ever created.
Now, when I was a kid I normally chose the Elf as my go-to adventurer. I though the Elf was a well-rounded character and was generally a pretty good guy. Well….. no such thing this time. This time, I chose the wimpy wizard but used a Dark Elf wizard from my collection. His name….. is Danzig, Danzig The Desecrator. Good ol’ mister Airborne, being the gentleman that he is, allowed me to pick two spell decks provided that I reduce Danzig to one attack and one defense die, making him extremely wimpy. BUT NO MATTER! I chose the Chaos spell deck and the Necromancy spell deck (which included some customer spells). With that selection we were off to the races…. 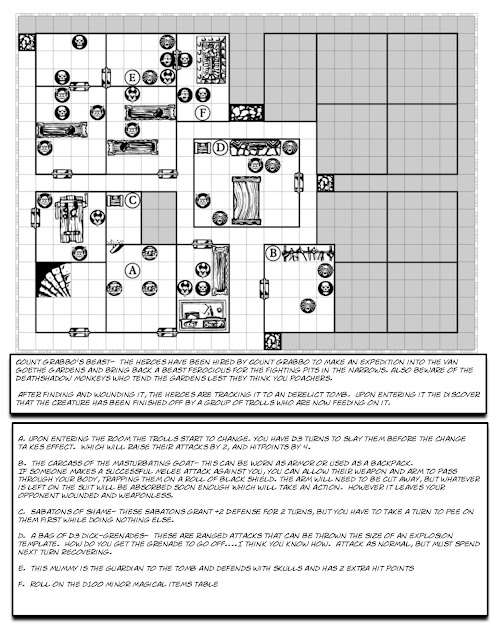 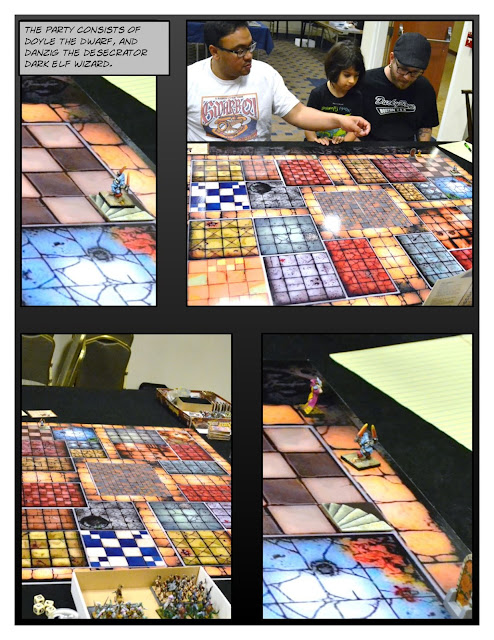 Danzig and his death-obsessed dwarven comrade (Doyle) entered the dungeon, and I have to admit the giant board filled Danzig’s little heart with dread. Their quest? Seek out a ferocious beast to fight in Count Grabbo’s notorious fighting pits!
Doyle and Danzig dauntlessly delved downwards into the depths of the dark and dank dungeon…
Judging by the size of the dungeon and the very distinct smell of troll in the stale air, Danzig conjured a cohort undead minions in case they ran into more trouble than they could handle. The fickle chaos god toying with Danzig’s fate rolled a 6 on a D6 and chuckled with glee as Danzig was allowed to summon forth two mummies and two zombies. WHAT FORTUNE! 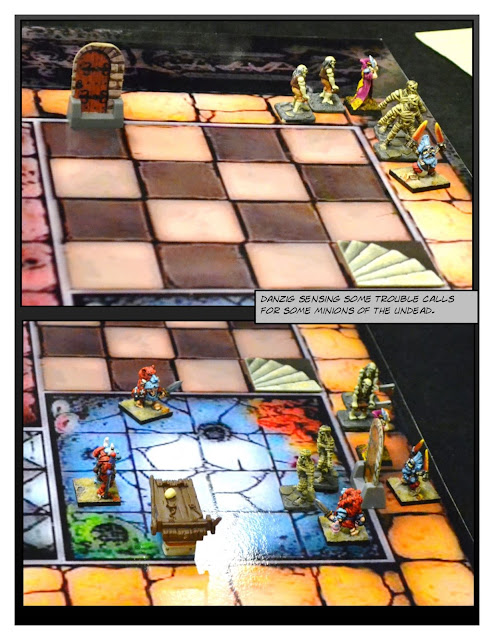 The foul undead creatures would prove to be useful when they stumbled upon a room full of chaos-worshipping things. The mummies burst through the door like a drunken, power-mad, unkillable SWAT team and pummeled the dwarf-things to death, and the party of evil adventurers was rewarded with a genie to do their bidding and they continued on, the smell of freshly spilled blood filling their evil bellies with vigor! 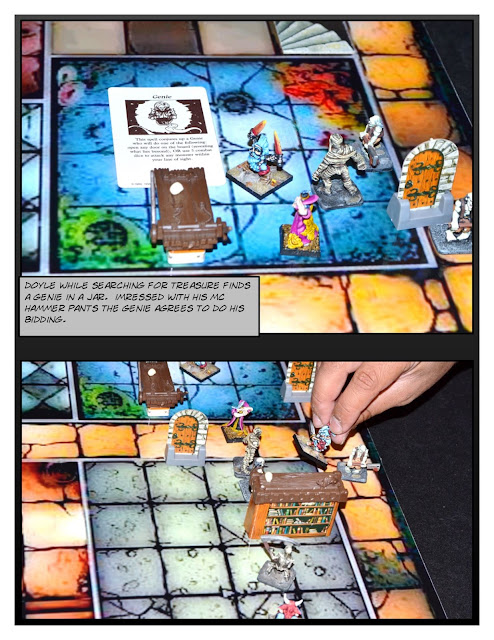 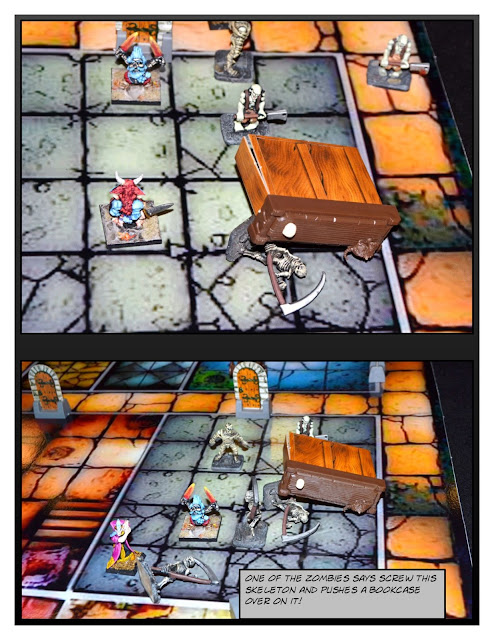 The party of anti-heroes rampaged through the dungeon, only stopping to deliver hearty belly-laughs when an enraged zombie splattered another zombie’s brains and guts all over the dungeon floor when it pushed over a bookshelf and squashed the witless enemy zombie like a rotten bug.
Danzig paused momentarily to shake his head at the tremendous run-on sentence his antics inspired. 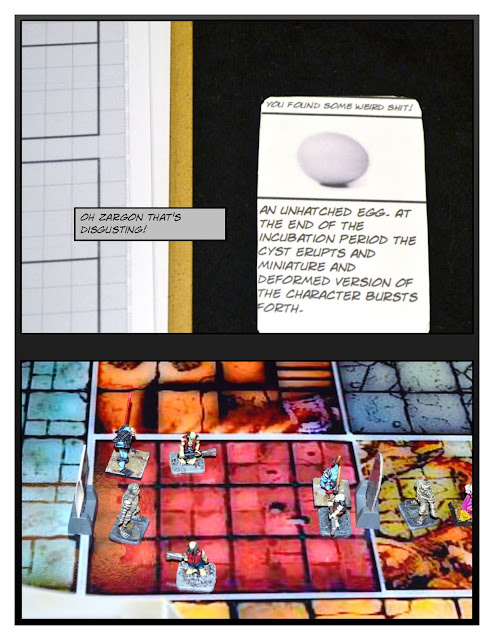 The next two rooms saw Danzig’s undead minions laid low by wandering monsters, so when he was confronted by a room full of chaos warriors and undead he was left with no recourse other than his foul chaos magic. Danzig asked the room full of monsters if they wanted to find hell with him… but it was a rhetorical questions anyways and he engulfed the room with a magical firestorm! 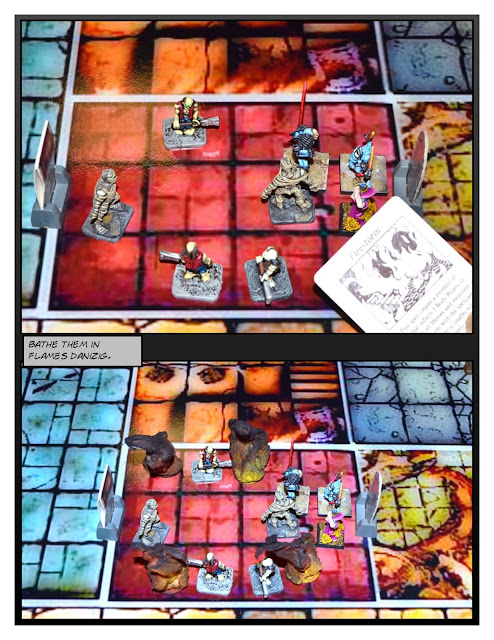 The firestorm was strong enough to destroy some of the weaker enemies in the room, but the stronger ones managed to survive, and so Doyle was forced to unleash a ferocious Dwarf Slayer from a magical egg he had discovered earlier. With their number depleted, Danzig summoned forth more undead henchmen… together they were unstoppable, for now... 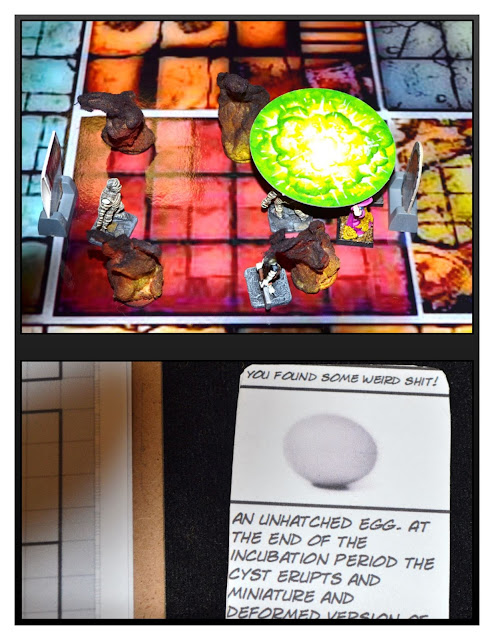 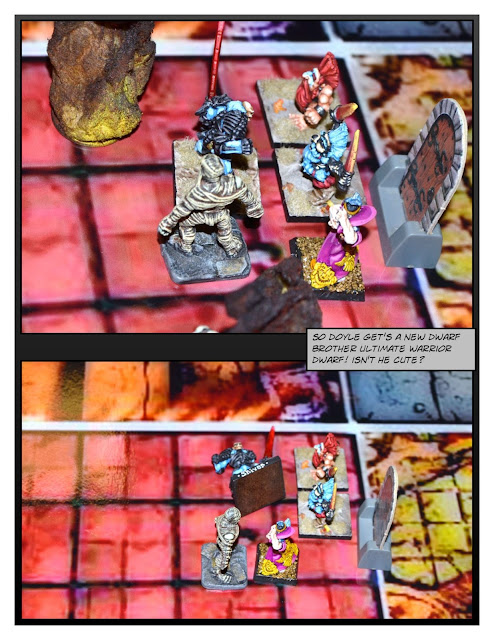 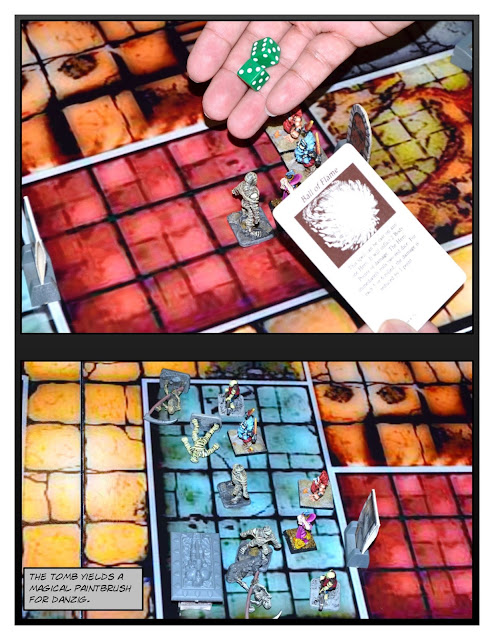 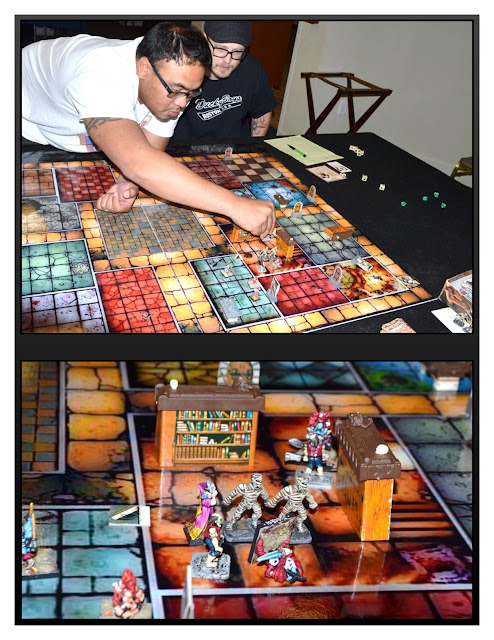 Just when the bloody rampage looked like it would continue unabated, disaster and terror stuck in the form of a towering Minotaur! It took everything the anti-heroes could muster to defeat the foul beast, and it cost Danzig the last of his zombie minions. The beast was finally slain at the hand of a pugilistic mummy. 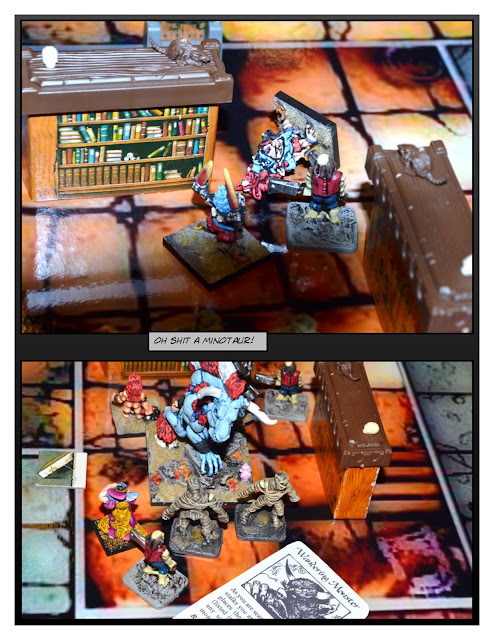 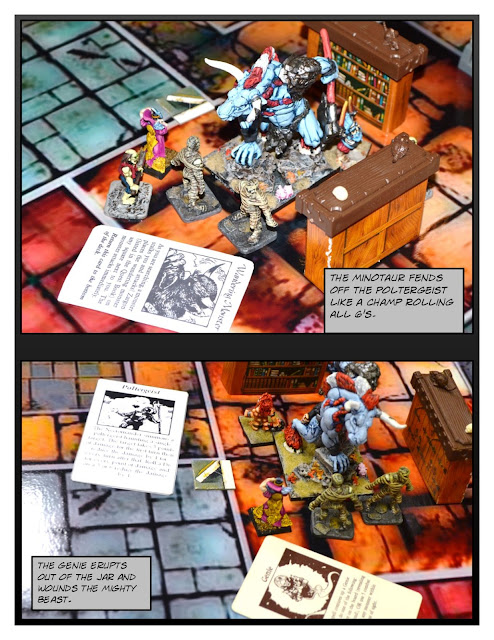 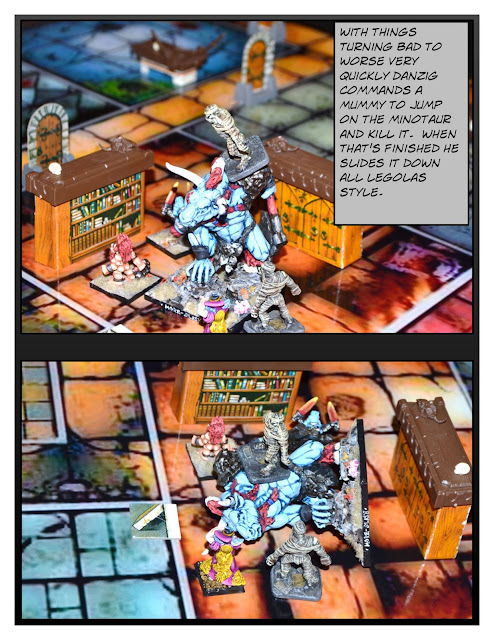 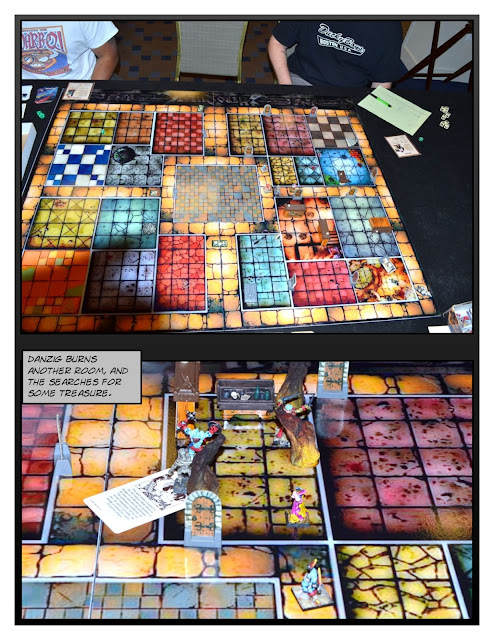 With renewed confidence, Danzig continued though the depths of the dungeon, burning out a room of chaos warriors and barely escaping with his life when he triggered a booby trap that flooded out one of the dungeon rooms. 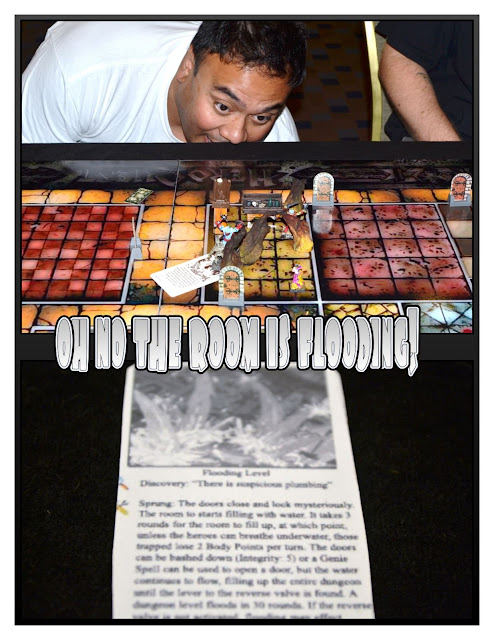 With only two more rooms to explore, the anti-heroes decided that balls-out brazen stupidity was the better part of valor and charged headlong into the largest room in the dungeon only to discover THAT IT WAS FILLED WITH MONSTERS! Danzig consumed his enemies with bolts of lightning from his eyes and balls of fire from his arse while the Dwarven duo hacked the foul beasts to tiny bits with their dwarven steel! 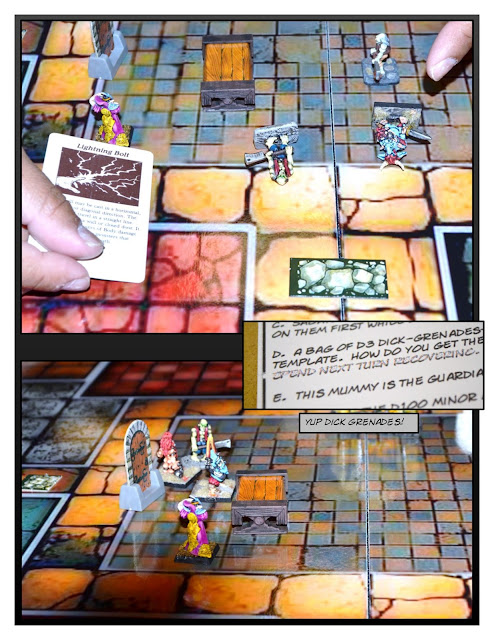 Their arrogant and unparalleled display of violence was rewarded with a box full of mystical weapons from the fabled sex-wars…. Yes….. a bag of dick-grenades. Yeah. That’s right. With only one room remaining, the evil doers concocted a room entry plan that would be the envy of SWAT teams, Ranger platoons, Green Beret teams, and airsoft warriors from across the multiverse. The dwarves would stack on either side of the door, dick grenades at the ready while Danzig prepared a fireball spell. Whatever foul goddamned troglodytes lurked behind that last door were about to catch a flaming face full of flaming magic man-yogurt. 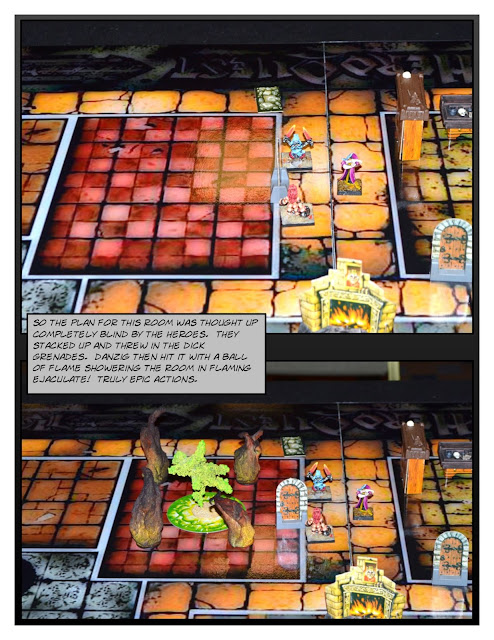 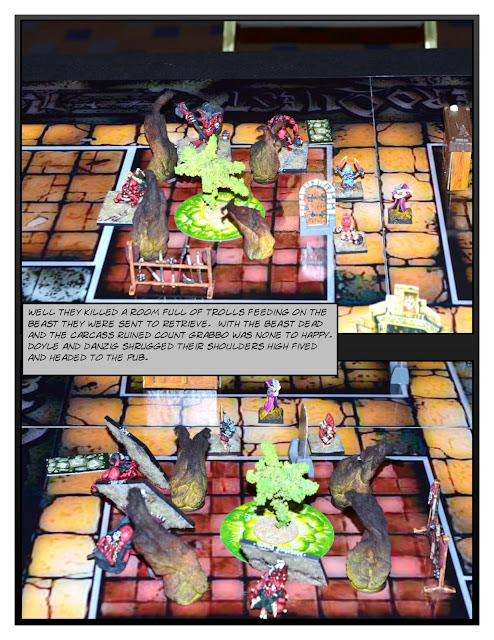 The evil trio cackled with delight as the trolls melted away in a burning sea of satanic genetic mucus. The day was won. Danzig as pleased.
Posted by airbornegrove26 at 5:56 PM