Time to clear the air!

Alright I am going to admit something here, I have hid it for a bit, but tonight I had a real inner talk with myself.  Oldhammer community I am a list tinkerer (er?) LOL.  Ha you thought it was something serious didn't you? 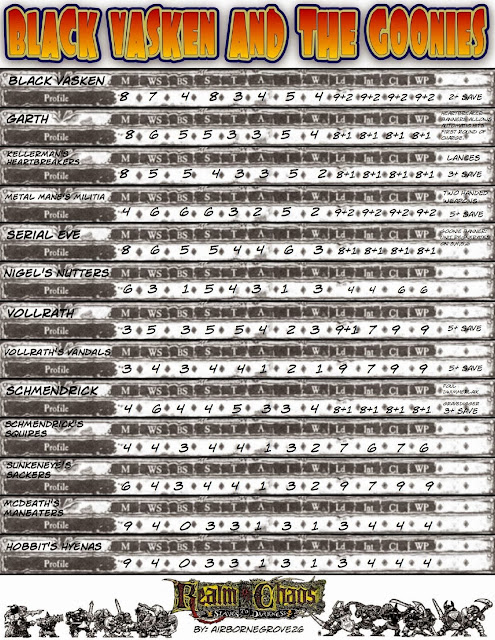 No I was downstairs tonight, moving things around, looking over Vasken's army and of course I have a whole new plan.  I really must stop! No seriously!  First it was at 1500-2000 points.  Then I just churched it up to 3000 just last week.  Now it's back to 2000ish with 2 divisions.

Why you ask?  Well I have really been thinking about doing some smaller 1000 point games.  So I wanted my core have to have army ie. my favorites, and then another relatively self contained division.  I have bumped my chaos warrior infantry down to marauders which is no bigs.  I have also decided to raise my chaos dwarf infantry up to 24 figures.  So I need around 16 more, looking at Ewal Dvergar, but really hoping Delaney King gets some new stuff out by August!  Fingers crossed.

This new army organization should...should be the final shuffle.  As it is really more along what I have wanted to do tactically and makes ease of force choice a bit simpler.  It was already in place, I was just being blind and hadn't noticed it. I also needed to simplify a few things, as I always seem to forget a special rule here and there in battle which is then just wasted points.

In other news I have revamped my Slaanesh army to 1000 points and will hope here in the near future to get another small campaign in.

Also those about to say, Tom don't worry about the points man!  I really don't, the main reason I fret about them is more for my opponent.  I would never want  someone to think I was trying to pull one over with some overpowered gambit.  Other then that I just let the dice fall as they may.
At least I have some painting purpose, I had been struggling with what to paint next for about two weeks now.

Until next time Y'all  YOLO!
Posted by airbornegrove26 at 7:14 PM