While at Bulldog Lopez's for Violence in the Valley I had time to browse through his White Dwarf collection.  I had a look through while eating a delicious bacon sandwich, made lovingly by my host and watching He-man, the single greatest cartoon ever created.

When suddenly I came upon this amazing image!  Instantly I dropped my sandwich, ketchup exploding across the floor. My mouth agape with tiny crumbs and bits of bacon hanging from my lips. 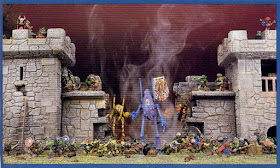 My word look at that!  Is that cigar smoke? Why are Eldar bursting through a castle wall?  Are those fantasy orcs not orks?  How can this be?  Well read on to know moawr.

I know I forgot all about my bacon sandwich as the dog ate what was left.  My mind raced as Prince Adam droned on in the background.

By the Power of Gropez I transformed into a inspired madman as my mind filled with ways to do this on my own.

Blasters, Swords, Jet Fliers, Riding beasts, Magic....Oh ya that's right I WAS watching He-man when I saw this.  LOL

Almost sounds like the start of Rogue Trader as well. ;)

I would suspect the driving force to play this type of game now is most of us barely get a chance to play proper 80's rules outside Oldhammer Weekend/BOYL.  So why not get everything we want to play with onto one table.  Make sense right?

Though this would require double the paper work and a rules checking right?

Maybe not Mec...maybe we just need to play, and forget checking the book for bog downing minutiae.  We need to get back to playing with our army men like we used to in our sandboxes.


All you need to do is find a scenario snippet you like from good ol' Warhammer Siege 1988. Then play and write a battle report.  It's easy look. 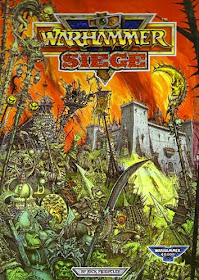 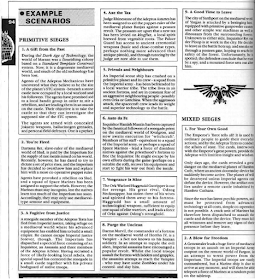 Meaning they had to show people that Rogue Trader could be played in a Fantasy setting.  Simple but game changing at the same time, as can be seen from the scenario briefs above. 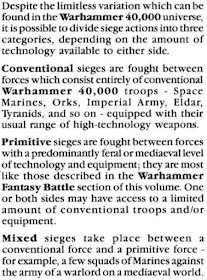 Reading through the text and scenarios gives you unlimited possibilities to play, depending on your interests. 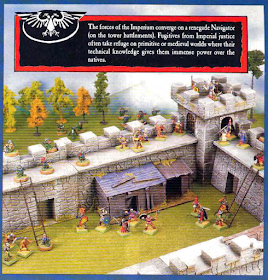 These Primitives have to get sick and tired of all these Conventional's showing up and destroying everything.

Or they just capture Dreadnoughts and force them to fight.  Seems like a job Luke Skywalker would have if he hadn't joined the rebellion.

Myself I really enjoying pushing the envelope.  But if you are a more conservative gamer there are more "official" guidelines you are welcome to follow.

So how can we get these relatively standardized for games?  Well if your like me you could just throw the minis on the table and not worry about if or... 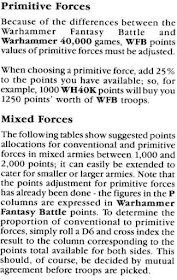 I mean that makes sense to someone like me who doesn't really dither around with points.  However that would be there should be 2 giants in the pic below....Yikes!!!! 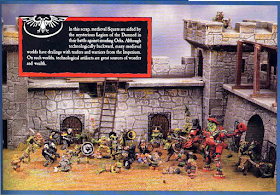 These fluff bits tho in the images.  Dwarves aided by the Legion of the Damned after and Ork Waaagh descends on their world. Get me some dice stat! Well you can do that too...it's official!

See it's okay...Bryan Ansell says so. 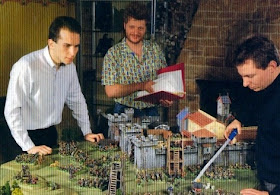 So there you have it, mix and match the forces you want, or have on hand.  Worry about points or don't.  Just have fun with the gaming time you have.  Also I know most of the presented material was for sieges, dont let that hold you up either.  Play normal battles, rearguards, ambushes whatever.  But you didn't need me telling you that if you've read this far. Tell next time M8's!
airbornegrove26 at 6:04 AM